The following “What the Pier Head Is Saying” columns by George Mackay Brown were published in the Orcadian during 1964, signed with his initials only.

The following “What the Pier Head Is Saying” columns by George Mackay Brown were published in the Orcadian during 1969, signed with his initials only.

2 October 1979, p. 4. “After being in the doldrums for years, the Pier Head is glad to note a great resurgence of interest in football, on the part of young folk.” ¶ 9 October 1974, p. 4. The pleasures of making beer at home. ¶ 16 October 1969, p. 4. “A great silence has descended on the town: the hush before winter.” ¶ 23 October 1969, p. 4. “Naturally the Pier Head was delighted with the Highlands and Islands Development Board decision to keep Stromness as the Orkney terminal of the Pentland Firth ferry.” ¶ 30 October 1969, p. 7. “In that longish spell of mild weather through October – ‘the peedie summer’ – creation turned back a little from the cold of winter.”

20 November 1969, p. 4. “Last week in the Youth Centre the Heritage Society gave a show of local slides, with commentaries by Ernest W. Marwick, E. Balfour and Ian MacInnes. It was intended to show the precious things – nature, streets, houses – that history has bequeathed to us, and that are perhaps in danger of being sacrificed to notions of progress and planning.” ¶ 27 November 1969, p. 4. “With St Andrew’s Day looming up . . . the Scottish Nationalists at the Pier Head are working up a fine head of steam.”

The following “What the Pier Head Is Saying” columns by George Mackay Brown were published in the Orcadian during 1967, signed with his initials only.

6 April 1967, p. 4. “The Pier Head members have been having nightmares for a week and more about huge tankers half-a-mile long going ashore on the Brough of Birsay or the Pentland Skerries or the Mull Head and saturating Orkney with oil.” ¶ 13 April 1967, p. 4. The town is full of visitors from Kirkwall because of a holiday there. ¶ 20 April 1967, p. 4. “All smiles at the Pier Head last week, as spring came at last after the wettest, stormiest winter in living memory.” ¶ 27 April 1967, p. 4. Extreme wealth and poverty in Edinburgh (where GMB is visiting).

1 June 1967, p. 4. Thoughts about “the most famous football match of 1967, Celtic’s 2-1 victory over Inter-Milan in Lisbon. . . . The Pier Head members, usually (as far as nationality goes) in a kind of no-man’s-land between Scandinavia and Scotland, definitely decided they were Scotsmen. . . .” ¶ 15 June 1967, p. 4. The pleasures of the most recent Stromness monthly holiday. ¶ 22 June 1967, p. 4. “Houses falling, houses rising. Slowly and imperceptibly the appearance of the town changes.” (One of his examples is the group of new council houses on the site of the old distillery, where he was later to live.) ¶ 29 June 1967, p. 4. The new benches at the Pier Head.

6 July 1967, p. 4. “Now is the time of summer visitors to Stromness. There is more activity than usual round the Pier Head this year. . . .” ¶ 13 July 1967, p. 4. “Stromness is full of Edinburgh folk just now (it being the trades holiday) and for the next fortnight beginning on Monday the accents of Clydeside will be heard on our streets.” ¶ 20 July 1967, p. 4. “Cars sometimes get on the nerves of the Pier Head – even worse than transistors. Every year cars and vehicles of all kinds get denser in Stromness.” ¶ 27 July 1967, p. 4. Pondering the possibility of a home-brew drinking contest during Shopping Week.

5 October 1967, p. 4. With the approach of winter, the Pier Head group is inclined to stay home – usually watching television. ¶ 12 October 1974, p. 4. Pensions are going up soon, but that extra money will disappear with the arrival of higher prices. ¶ 19 October 1967, p. 4. The centenary of the Stromness lifeboat.

7 December 1967, p. 4. Changes in the Stromness skyline, especially the new flats going up at the site of the old distillery. ¶ 14 December 1967, p. 4. “On these days, with snow swirling out of the norther, those at the Pier Head wish they were bears who could sleep in a cave all winter.” ¶ 21 December 1967, p. 4. How we observe the winter solstice – and how it was understood in earlier centuries.

The following “What the Pier Head Is Saying” columns by George Mackay Brown were published in the Orcadian during 1965, signed with his initials only.

1 April 1965, p. 4. Stanley Cursiter once suggested that “the present Warehouse Buildings – built in the early 19th century for a rice store” – should be made into a new town hall. ¶ 8 April 1965, p. 4. “Often the Pier Head, in reminiscent mood, speaks of the great number of peedie shops that there used to be in Stromness, usually kept by old wives with shawls.” ¶ 15 April 1965, p. 4. “The Pier Head is a bit disillusioned with factories and talk of factories. . . . What does rouse their enthusiasm at the mere mention of it is the great herring fishing days in town at the turn of the century. . . .” ¶ 22 April 1965, p. 4. What title the locals would like to assume if they were made a lord. ¶ 29 April 1965, p. 4. “The news that ITV (Grampian) is shortly to be available to Orkney viewers got a mixed reception at the Pier Head the other day.”

GMB’s The Loom of Light (about St. Magnus) will be performed on 20 August as part of a series of events to raise money for the restoration of St. Magnus Cathedral.

The following “Under Brinkie’s Brae” columns by George Mackay Brown were published in the Orcadian during 1980 and were signed with initials only. Most were reprinted in GMB’s Rockpools and Daffodils (1992), cited here as RD. 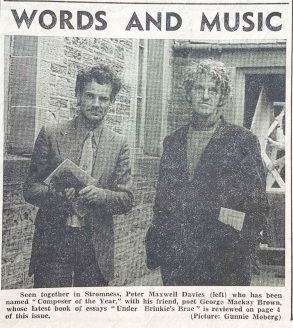 A large photograph (by Gunnie Moberg) of GMB and Peter Maxwell Davies on the front page of the Orcadian.

## GMB Materials in Other EUL Collections

## GMB Materials on Other Scottish Authors

## Manuscripts of Works by GMB